A new chapter for Birmingham’s Wholesale Market began today (8 May 2018), as the traders’ new purpose-built home in Witton opened for business.

Birmingham City Council has significantly invested in the new site to create a facility fit for the 21st Century, which is run by the Birmingham Wholesale Market Management Company. 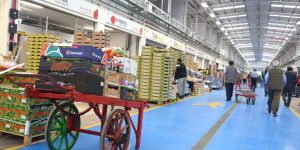 Based at The Hub, on Nobel Way, Witton, the new market includes 78 units selling fruit and veg, meat, poultry, fish and flowers, along with nine warehouses, café and management offices.

As one of the largest integrated wholesale markets in Europe, Birmingham’s traders provide fresh produce to restaurants, hotels, fast food outlets and local retailers across the Midlands and Wales.

This represents an investment of nearly £50m in Birmingham’s future, with the Wholesale Market acting as a catalyst for city’s economic wellbeing – and its traders playing a vital role in Birmingham’s story – attracting business from across the UK and Europe.

Members of the Birmingham Wholesale Market Company showed both Cllr Ian Ward, Leader of Birmingham City Council and Waheed Nazir, Corporate Director for Economy, around the new site to see traders open for their first day of business today.

Cllr Ian Ward, Leader of Birmingham City Council, said: “The markets continue to play a major part in Birmingham life and this is the next exciting chapter in a story that goes back almost 900 years.

“This state-of-the-art facility brings the markets firmly into the 21st Century and I’d like to thank traders for working with Birmingham City Council on this project. I’m sure Birmingham’s historic Wholesale Markets and the many traders working there will now grow from strength to strength.”

Eddie Price, director of Birmingham Wholesale Market Company Ltd, said: “We, as the management company – a joint venture between the traders and the city council – wanted to thank the Cllr Ian Ward and Waheed Nazir for their significant contribution, without which the market could not have opened.

“Now our focus is on developing the market to reach its full potential as the wider region’s ‘go-to’ destination for fresh produce.”

Read more on this article here: